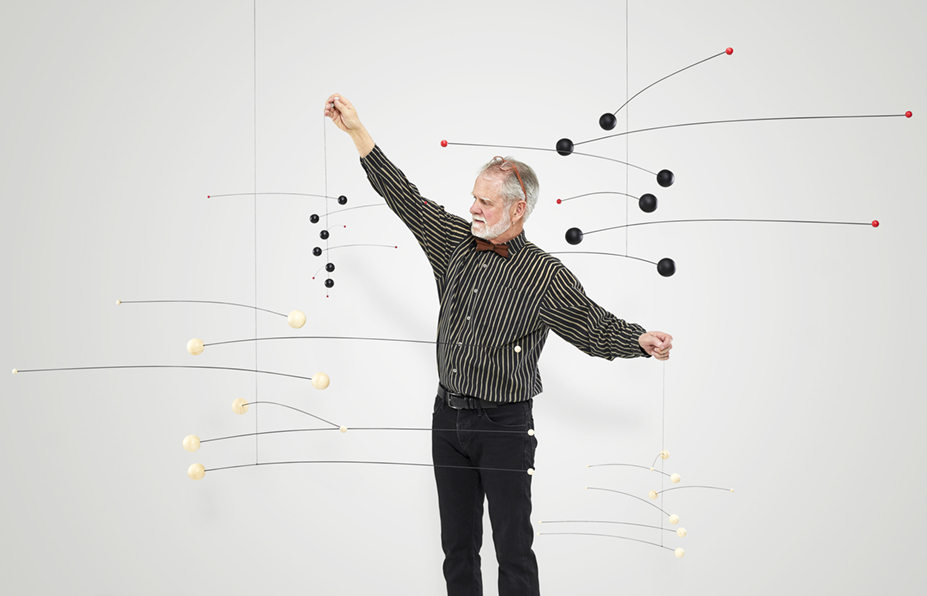 Mobiles all over the world - made in Denmark 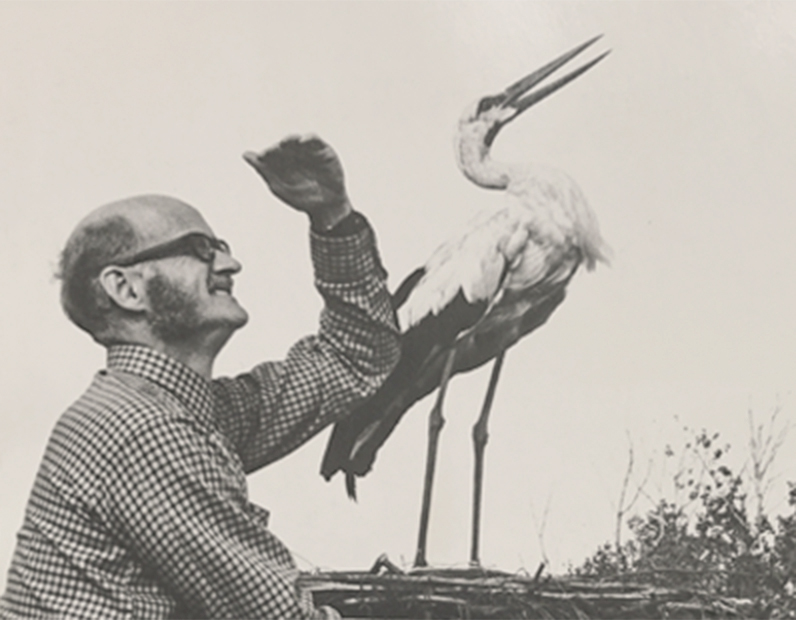 It started with a stork – in the form of a small, innocent mobile with three small storks – which the founder of the firm Christian Flensted, made for the christening of his daughter, Mette

The idea came with the stork

The Flensted Mobiles fairytale is actually based on two straws and three paper storks. For this was what Christian Flensted cut out and assembled in 1953 when the christening of his daughter, Mette, was going to be celebrated. The result was the stork mobile, which was only conceived of as being a fun, ingenious and personal gift, but ended up as the prelude to Flensted Mobiles. For only a year after the daughter’s christening the firm Flensted Mobiles was established. And to this very day the stork mobile has remained in production. When Christian Flensted founded the firm, along with his wife Grethe, the family was living in Aalborg – in the three-room flat where the workplace was the dining table and storage room was under the sofa.

Christian Flensted became known as ‘Uromageren’, directly translated ‘troublemaker’. “Uro” is the old dansih word for mobile and “mager” is the word for maker. This nickname corresponded well with his creative capacity to create elegant, classic designs – and unique, extraordinary mobiles that can both set their surroundings in motion and create a balance of mind. For when it comes to mobiles, rest and restlessness make a happy couple. In 1956, the Flensted family returned to their native island of Funen. Here the family and firm settled in an idyllic farmhouse with adjoining workshop near Tommerup. The place was christened ‘The Stork’s Nest’ after the first mobile. 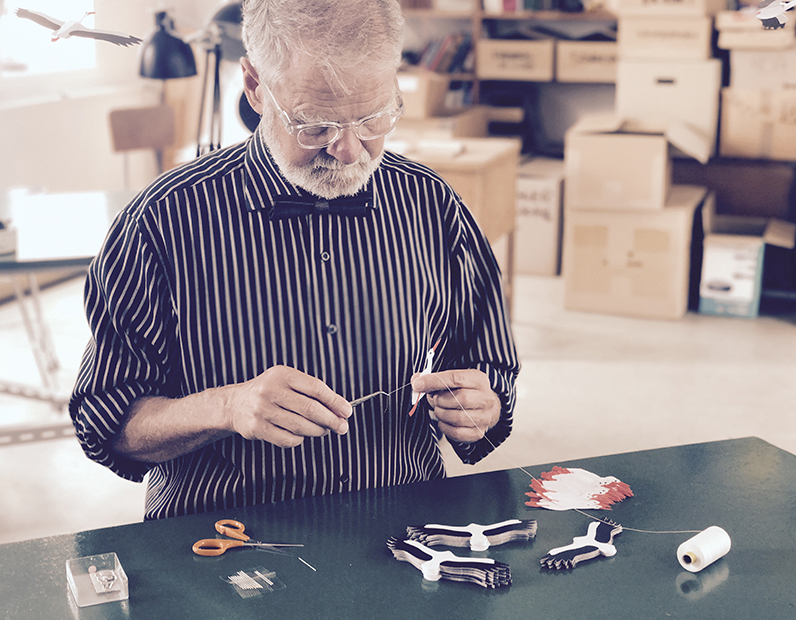 Ole Flensted likes to be close to the entire process, from the first concept and sketches to the finished mobile

In 1972, production had increased to such an extent that another removal became necessary. This time it was to the former school ‘Frederiksminde’, close to Brenderup and also on Funen. This old, historically interesting building is still the home of Flensted Mobiles.

The baton passed on

In 1982 Grethe and Christian Flensted decided to pass the baton on to Ole. In connection with this change of generation at Flensted Mobiles, the running of the company was now taken over by Ole and his wife, Aase. They have continued to operate the mobiles company every since, paying great respect to its ideals and creative angle on the world. The older generation gave room to the younger, so that they could leave their mark on the company – new mobiles came onto the drawing board, and new markets were opened up. 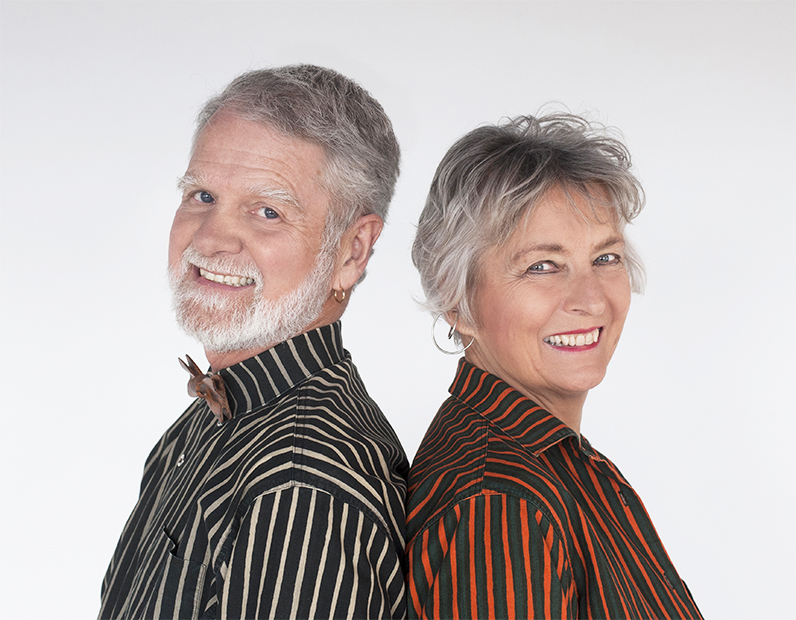 Since 1982, Aase and Ole Flensted have spearheaded the highly mobile family company

Today, Flensted Mobiles features more than 250 different designs, and we still actively develop new concepts and mobiles too. For there are still plenty of mobiles just waiting to be invented…

We use cookies on our website to give you the most relevant experience by remembering your preferences and repeat visits. By clicking “Accept All”, you consent to the use of ALL the cookies. However, you may visit "Cookie Settings" to provide a controlled consent.
Cookie SettingsAccept All
Manage consent

This website uses cookies to improve your experience while you navigate through the website. Out of these, the cookies that are categorized as necessary are stored on your browser as they are essential for the working of basic functionalities of the website. We also use third-party cookies that help us analyze and understand how you use this website. These cookies will be stored in your browser only with your consent. You also have the option to opt-out of these cookies. But opting out of some of these cookies may affect your browsing experience.
Necessary Always Enabled
Necessary cookies are absolutely essential for the website to function properly. These cookies ensure basic functionalities and security features of the website, anonymously.
Functional
Functional cookies help to perform certain functionalities like sharing the content of the website on social media platforms, collect feedbacks, and other third-party features.
Performance
Performance cookies are used to understand and analyze the key performance indexes of the website which helps in delivering a better user experience for the visitors.
Analytics
Analytical cookies are used to understand how visitors interact with the website. These cookies help provide information on metrics the number of visitors, bounce rate, traffic source, etc.
Advertisement
Advertisement cookies are used to provide visitors with relevant ads and marketing campaigns. These cookies track visitors across websites and collect information to provide customized ads.
Others
Other uncategorized cookies are those that are being analyzed and have not been classified into a category as yet.
SAVE & ACCEPT