A Mobile - Almost a Living Being 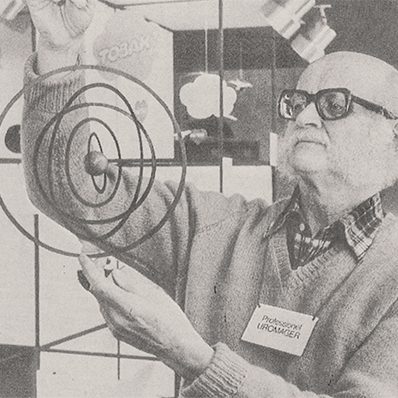 “A mobile: a decorative, often humorous design of artistic imagination. Hanging from a single point, suspended by wire and thread, it is made up of several shapes in different materials, all of which revolve independently under the influence of even the faintest currents of air in a domestic interior.

Balance is the crucial factor both for movement and visual impact, allowing the individual shapes to become a three-dimensional unity of infinite variations moving through light and space.”

Like an aquarium, a mobile catches and holds the eye, and to watch its calm subdued movements brings serenity of mind, and fosters one’s thoughts and creativeness. In a room where there is no apparent movement of air, invisible air currents will ceaselessly bring the mobile alive, and it will never remain absolutely still. As the Mobile Maker, Ole Flensted, so vividly puts it: “A good mobile can continue in motion for 10 minutes after a cat has exhaled nearby”.

For centuries mobiles have been assembled all over Scandinavia and around the Baltic Sea.

Mobiles were made as a pastime, for enjoyment or as a home industry. Straw, bits of thread and paper were the materials used to make the beautiful mobiles found in Europe, and especially in Scandinavia. A great amount of superstition was attached to mobiles. Among other things it was said that if a person of evil intent entered a room in which a mobile hung, the mobile would immediately cease to move! Stating that a mobile never remains still is herefore not quite true. It was widely held that the mobile kept burglars away from the home. Also the mobiles were hung by village women over a baby’s cradle to protect the children from the evil eye and soothe them.

Today we are utterly convinced that mobiles help chase away the mental spook of tension.

The mobiles of those days were in balance – made by people in balance. To this tradition of balance, Flensted Mobiles adds the quality of Danish Design: Elegance, modernity and originality. The Flensted Mobile Centre has created their mobiles to be in perpetual motion, while maintaining a constant and harmonious balance. Flensted Mobiles are designed for the home

The “father” of mobiles within art was Alexander Calder (1898-1976), the American artist and sculptor. Read more about “Sandy” at www.calder.org